The mailout of the CD’s will start tomorrow. We have limited quantities available of this release. Please contact us if interested! 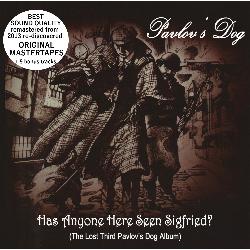 It’s been only three years since 1974, when Pavlov’s Dog were celebrated the highest signed newcomerband ever since, ready and being expected to climb the peak of rockmusic. Classics such as Julia and Song Dance, plus David Surkamp’s incredible vocal performance branded their iconic release Pampered Menial in 1975. But the band started to fall apart already when they recorded their 2nd album At The Sound Of The Bell. Violin player Sigfried Carver had already left (that’s where the title „Has Anyone Here Seen Sigfried?“ comes from). 1977, during the recording sessions of Has Anyone Here Seen Sigfried, the band finally split.

Frustrated and burned out David Surkamp and Douglas Rayburn took the unready tapes to New York and finished the work with  contributions of Elliot Randall and Jeff Baxter of Steely Dan. Columbia Records anyway refused the release. The musicians received a cassette copy in 3rd class sound quality. Since then the original mastertapes were believed to be lost.

In the 80ies one of the musicians manufactured a short run of vinyl copies – made of his cassette copy – and „released“ it under the banner of „St. Louis Hounds“ (he was scared to use the name „Pavlov’s Dog“). From this vinyl some dubious „labels“  manufactured CD bootlegs (titled „St. Louis Hounds“, „Third“ or „Great Lost Third“, a.o.). So enforcedly the 2004 reformed Pavlov’s Dog authorized the first legal release to Rockville Music in 2007, titled „Has Anyone Here Seen Sigfried?“. Unfortunately still in poor sound quality, but with 10 bonus tracks added. This could have been the end of the story, if …

… in 2013 the original mastertapes weren’t rediscovered! After restauration the sound quality turned out excellent. The difference to what’s been out before is just phenomenal (once again: Anything out before was made from copies of copies of anyway bad sounding cassette tapes). So finally, after 36 years, fans can listen to the album as its been recorded & produced  in 1977!

Together with the mastertapes, the artwork supposed to be the artwork of the original release, was as well rediscovered. Additionally, this release comes with 9 new & previously unreleased bonus tracks: Stop Short was originally recorded but not included on the „St Louis Hounds“ vinyl. Plus 6 live tracks recorded 2011/2012 (incl. the never before released Paris), plus an acoustic version of Julia (2007), plus an alternative mix of Falling In Love as well found on the mastertapes.

Last not least: The booklet tells the true story of this album, written by David Surkamp.