The PR for this album will start via Haulix on Wednesday; promo CD’s will be available in early January. Please send us your requests! 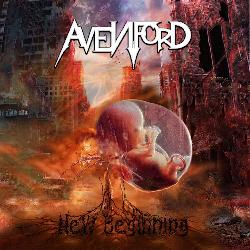 Avenford was formed by guitarist Peter Szehoffner and guitarist/vocalist Arpie Gamson in Hungary in the summer of 2012.

Initially they started to create music on their own as they got on well from the beginning, both having similar backgrounds, musical ideas and influences which include Masterplan, Jorn Lande, Yngwie Malmsteen and Iron Maiden etc.

A few months later they had enough material written for a full album and with the help of lyricist Zoltan Bako the songs reached their final form.

Soon after Szehoffner and Gamson moved to the UK, they got together in Gamson’s flat and recorded the basic tracks for the first album. It was named after their most epic song “Mortal Price”. The tracks were sent to Devenver studios in Hungary for final mixing – it also helped that the studio owners were also huge Maiden fans. The line-up was completed by Pete Jean (drums) and Zoltan Meszaros (bass).

Since then, the band has gone through a few changes but apparently is stronger than ever.

Jivodar Dimitrov joined AVENFORD on drums and Tom Longbottom took over the bass. “New Beginning” was recorded with Roland Grapow (Masterplan) – and it’s stronger, harder and faster than the first one.