Sweden always has been a country which has brought the Hard Rock & Metal community a lot of amazing, new talents – including some kind of extra-ordinary guitar geniuses.

The latest hottest sensation from Scandinavia in this respect is guitarist SAMMY BERELL who will debut with his album “Passion Dreams” on March 17th, 2017 via Dark Force/Sound Pollution. The neo-classical inspired Swedish axeman for this release joined forces with the exceptional singers Göran Edman and Mike Vescera and producer/drummer Daniel Flores.

A single and a video for the track “Drakkar” will be released in advance on February 17th.

If you are into “early” Yngwie Malmsteen and Europe’s John Norum’s ‘early’ solo albums, this will be a hot one for you! 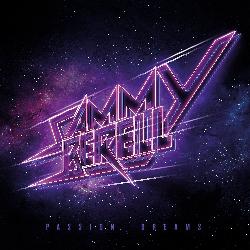 Dream passionately. Dedicate your life to your craft. Work hard and aim for the stars! That is the story of Sammy Berell.

It all started back in the early 80’s when as a kid Sammy walked into a church and heard the angelic sound of the organ and someone playing a classical composition by Johann Sebastian Bach. Mesmerized by the sound and bewildered by how someone could play so many different tones, classical music would have a great impact on his life from this day.

Sammy Berell was so inspired by the old composers and started practicing different instruments, including the piano at the age of six as well as the flute, drums and violin to name a few.  As an early teenager he was given an electrical guitar by his father and at the same time he had grown tired of his acoustic one.  He was instantly hooked because it was so easy to play and learn it. It felt all so natural.

Encouraged by his parents, most importantly his mother to pursue his dreams about music, he practiced day in and day out. But people never seemed to understand his extraordinary talent and few people took him seriously. Even though he knew he was good, Sammy Berell wanted to shine above all the others. He sacrificed a lot for years as he recorded himself and practiced even more. He knew that he had to aim high and never compromise if he wanted to reach his dream.

Sammy Berell’s debut “Passion Dreams” is set for release in March 2017 on Dark Force Records / Sound Pollution. The album, born out of dream-fueled passion was recorded in Sound VS Science Studio with producer Daniel Flores (The Murder Of My Sweet, Mind’s Eye, Saviour) together with Sammy Berell as a co-producer.